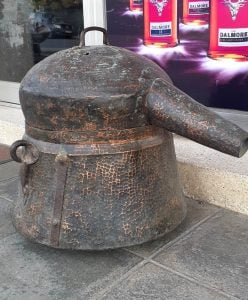 Entering a new decade I look forward with excitement, not back with analysis…
I’m anticipating great changes in the Scotch Malt Whisky Industry.

Whisky will be produced for two markets. One which feeds the new whisky drinkers and moves into country after country. And another which is niche, specialised, handcrafted, small, bespoke, “farm without a farm”. The new commodities are Time and Experience.
(and Water: but this is not the place for that discussion)

Expanding our thinking in the new decade……
Think about Community scotch making.
Why not?
Think about making scotch at home as individuals
Why not?
Think about producing one or two casks a year from your own Single Malt Whisky House.
Why not?
Please don’t start blabbing on about what we are not “allowed” to do….
Think for a minute, and wonder why these so called “laws” are in place. Why do we believe we are not “allowed” to make whisky….
The reason has nothing to do with creating calibre liquid, or health and safety.
The reason is only to protect the revenue – the money – taken by HMRC – Her Majesty’s Revenue and Customs, in taxation and duty payments. And the ease of extraction of this revenue.
No other reason.
These “laws” are not to protect the consumer by high quality food regulations. They are not to protect the producers.
These “rules” are not to protect the image of Scotch, or Scotland. They are not set up to help the people of Scotland produce their own national drink. These rules are in place only to serve as easy ways of extracting money for the Westminster treasury.

Let’s start thinking differently about Scotch Malt Whisky PRODUCTION.
As long as taxes are paid to which ever relevant body, lets think about restructuring rules and regulations to create ways for people who live in Scotland to make whisky.
I am not advocating anything illegal here, neither do I mean we should relax the ways in which Scotch Whisky is protected.
In fact, I think this should be further built upon to highlight and protect the calibre and quality of Scotch Malt Whisky.
What I mean is that we need to become far more subtle and sophisticated in our ways of “governing and protecting Scotch Malt Whisky making”. Scotch Malt Whisky does not need to be made in huge amounts for it to be a calibre product.
There is absolutely no physical requirement for this way of doing things in the actual act of making whisky.
Lets differentiate between a physical distillery and the process of making whisky. Separate the building from the process.
The liquid is the thing. As long as we make the liquid in Scotland and mature it in Scotland. And do all the “right” things: Why not?
We could make small volumes of whisky in our back yards.
Why should I not be able to make whisky? I am able to make cheese from milk, jam from berries: yet I am unable to make whisky from barley, as it is not “allowed”.
Why don’t we restructure the system and only tax/duty if we are SELLING the whisky we make?
If this is the case, we can easily set a new collection system. Instead of starting at the distilling end, we start at the drinking end and work backwards.
Sell a bottle of whisky – it needs a label/stamp/certificate to say you have paid your tax and duty.
It needs to have a stamp/label/certificate stating that the whole process took place continuously in one batch.
Strata certification can be worked out – Islay barley, malting & mashing & fermentation in Islay. Distillation in Islay. Maturation in Islay: for example. What yeast is used, where the yeast comes from. All these things can be shown and proved and certified in small scale production. These systems can be created easily using a mindset coming from a supportive rather than extractive focus.

Obviously, this certification can be Scotland wide. We need an appellation controlee for Scotland – and named in Gaelic Language, or Scots – or Doric!  not French…
We need a fusion of old and new; IT recording and tracking of our methods and production. Old fashioned craft and work(wo)manship to produce calibre liquid – Time & Experience…
One can join this Certification scheme, similar to joining the organic soil association, for example. You don’t need to, but if you want to sell your product you will feel compelled to. Otherwise no one will buy as you could be making any old gut rot and you won’t have a way to prove otherwise!
Whisky making can be done in each household. We can have a small copper still/alembic. We can make a mash in a large vessel in our garden and then distil in a small copper alembic.
How to do it.
Grow barley in your garden. Ask a farmer to grow barley for you in a field. Get together with your friends and reclaim a piece of wasteland and grow barley.
Grow it by hand. Who says you need all the heavy machinery.
Harvest barley by hand – use a sickle or a sythe, why not?
The only reason we use tractors and combine harvesters etc is because of the volume of barely being grown. Who says this has to be the only way? No one!
Distilleries could offer their plant for you to make your spirit that year. So, either you could go to the distillery – or the travelling still could come to you.
Glasgow distillery could have 4 weeks in the year where they rent us a run of their plant – likewise Ncnean, Daftmill, Abhain Dhearg – any where in fact.  – I name these distilleries are they are independent, but perhaps one could work out a deal at Laphroaig…. who knows!! 🙂

1.Personal connection fosters care of landscape, humanising of business behaviour – leads to health in people and health in the land.
2. The Scottish government could offer grants to help people start up small scale Scotch production. People can grow barley in their own fields if they are a farmer – if not, people can get others to grow barley for them.
The government/distilling organisation can buy a few stills and people have access to them. Different shapes of stills – so each year you can make a different type of spirit if you wish – or book yourself in again for the same still.
So, as long as you can create germination or have access to germinated barley that suits your requirement, you are good to go.
People who wish to participate in this type of creation are people who want to do the best, make the best. People with passion and creativity. They are not going to use horrible barley, or unclean utensils – and if they do evade the rules, their product will get a bad reputation and not sell, so they will not succeed.
We need to start thinking of distilleries as “pop up” restaurants – we could have residencies for “star” chefs/distillers/djs.
a) How to get the elements. Water/Barley/Yeast/Casks
b) How to get access to the tools for production – germination can take place anywhere.
4. local area sales – a Scotland wide distribution agency run by the government – an independent agency
5. Have an agency that tests the liquid and puts and appellation label on it. You need to apply to be in it. You need to have your product tested each year – you test it yourself each time you undertake a process. It is all entered into the System programme. Once you have all the “gold stars” you get the stamp to put on your bottles.
6. It is not up to me to design the system – I mean I can (!) I am just wanting people to expand their thinking…
7. You don’t need to be someone who makes whisky all year. Whisky making is part of an agricultural cycle – people pick raspberries in the autumn and make jam. We don’t think about making jam in February. So, it can be the same with Scotch malt whisky. We can make it in the autumn. People have a garden and harvest this produce when it is ready – why not do this with barely and make small amounts of Scotch.
8. Don’t start going on about people drinking gut rot and going blind – they can do this already in oil drums and twin tub washing machines and they don’t, why on earth would they start now?
9. Have a National Advertising budget – everyone puts in so much. Depending on how much you want the agency to do for you.
10. This also has a distribution network – now this does not need to be a newly set up thing. It can be or it can engage with what is already there. This way we can let the consumer access far more interesting whisky. Also, have it change – be alive and vibrant – like the new Beaujolais programme… so fantastic – so well marketed.
Linked advertising and distribution network – a Spar for whisky makers…. why not?
Variety – people now are turning to Independent bottlers – distilling ones own is a natural progression in the search for bespoke bottles.

We could go so far as to go back to the past where we all buy casks and they mature in our own houses… why not?
Pride and satisfaction – personal control – personal engagement – what you do makes a difference!
And there you have it.
The future of Scotch is ours. Whisky is coming home!
Bliadhna Mhath Ur dhuibh uile!