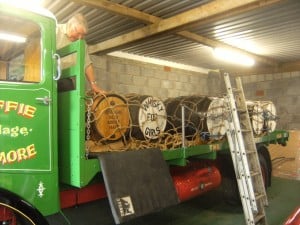 The lorry was built in 1950 and Duffie bought it in Preston from Terry Bullas, who lovingly restored it.
These Albion Cheiftain lorries were used for haulage in Islay by the Co operative Society. Duffie remembers when the Co op garages were in Shore Street, Bowmore and his brother and Neil Johnston were drivers. This lorry has been restored in the original Co op colours. It was repainted by WH Malcolm and all the sign writing was done by hand in the traditional way by Mr J F Rippey. 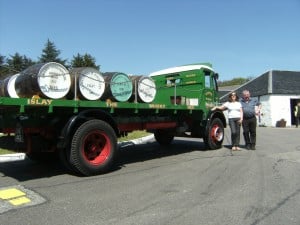 These lorries were common sights in and about the Islay distilleries in the past. When Duffie brought this restored lorry back to Islay in Aprilthis year he decided to furnish the lorry withdisplay casks from all the distilleries. The distilleries provided the casks, some stencilled them, and some were done by Duffie’s wife Roberta.There iseven one with the original stencil from Port Ellen Distillery. Douglas MacTaggart found the stencil his father had and he and Duffie inked up a cask with it.
I wasdelighted when Duffie asked ifWhisky for Girlswould like to have our own cask on the lorry. 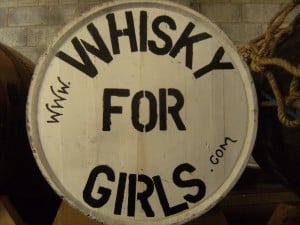 Lewis Boyd and Scott Shaw supplied me withBowmore Distillerystencils and Duffie and I set to work today making the cask ready for it’s place on the lorry. 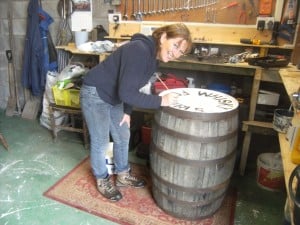 I thought one end of the cask looked better than the other as I made a better job of the stencilling as I got nearer the end!
Wedisplayed my cask beside the Bowmore one as they were kind enough to helpWhisky for Girls out with the stencil. 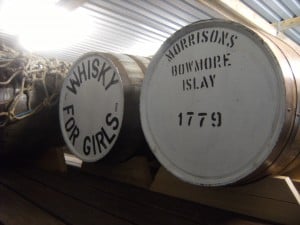 It was great fun to do, then we rolled the cask up a ladder onto the lorry.
Duffie put a rope net over the barrels just incase, although they are all firmly attached to the lorry. 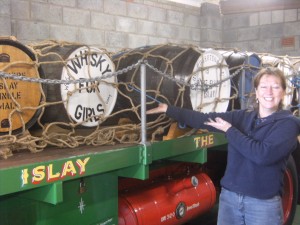 You can see the ink stained hands as I display the finished cask!
Duffie is taking the lorry to the mainland this weekend to take part in a famousroad runcalled ‘Gang Warily’ in memory of Peter Drummond. http://www.albion-trust.org.uk/Events-calendar
Last year the rally had around 40 vehicles taking part, this year there maybe more. The route is about 60 miles long and takes in Dalkeith andBo’ness and Kinneil Railway to name but a few places.
If you are driving on mainland Scotland this weekend, look out for Duffie from Islay’s lorry with a display cask from all the Islay distilleries ~ and, also,the Whisky for Girls cask!
The Whisky for Girls Cask is now a permanent part of the display on the lorry.
Duffie told Whisky for Girls he is happy to realise his long term ambition of owning one of these old lorries, and bringingHome a piece of Islay’s history.
We hope in the very far future people will look back on Whisky for Girls as a part of Islay’s herstory and be pleased to see our cask on the whisky lorry along withthe other famous brands!
Thank you so much to Duffie for his support and to Scott and Lewis and the boys from Bowmore Distillery for their help. 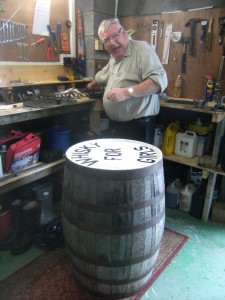 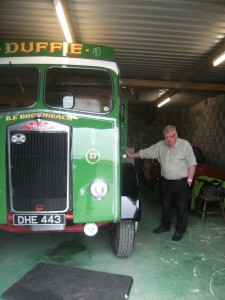