Whisky for Girls (& Guys!) were invited to host a Whisky Tasting of Islay/island malts. Ostensibly the event was for women, but guys were welcome, too! 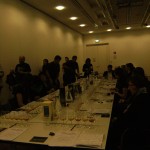 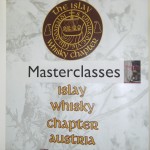 We had a selection of 6 drams ~

In order of tasting ~

Thanks to Arran Distillery for the ARRAN 10 yo~ 46% abv, unpeated, citrus notes ~ orange, cinnamon, peppery sparkle. The water for the distillery comes through red granite. This is a smooth, fluffy mouthfeel with light, sparkly kick. Nice orange oiliness and a dryness give this dram a balance with the lightness.

ARBEG CORRYVRECKAN~ 57.1% abv. 50 ppm. Rich, heavy, peaty dram ~ tarry notes, bit of chocolate, creosote, brown sugar. Very fruity and rich with the power of the peat and the tar to balance it. Matured in American and French oak casks. Also, as this dram is cask strength the alcohol level is carried by the power of the flavours. A smokey length with salt and a hint of blueberries coming in from the side. 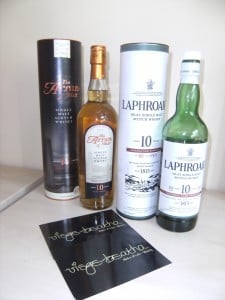 BOWMORE DARKEST 15 yo~ 43% abv, the lowest alcohol by volume of the tasting ~ 12 years in Bourbon casks then 3 years in Oloroso sherry casks give this dram a sweet, raisins & chocolate taste balanced by the signature Bowmore smoke. This has a long finish and is a lighter but still robust dram. This is the material equivalent of patterned velvet to the brocade of the Laphroaig.

We tasted the drams without water, with water, and then, with chocolate ~ just delicious!

This is the first festival of it’s kind held in Graz. And it was very successful ~ we were even on the Austrian TV News!

There were chocolate makers, kilt makers, whisky makers, cigar makers ~ I liked this festival as it was pro active ~ there were many people here who produce their own product, not just selling something that others had made. Also, there were singers, dancers and pipers ~

One of the pipers is a lady called Romana Brunner. 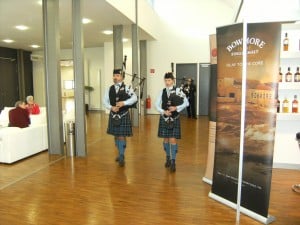 She is the Pipe Major of the Carinthian Pipes & Drums. Romana is a music teacher and in 2009 she travelled to Uist in the Western Isles, and lived there for a year, being taught to play the pipes by Iain McDonald. Iain McDonald and his brotherswere good friends of the late A.S. Macneill, who helped found the National Piping Centrein Glasgow, Scotland; ~ and A.S. Macneill is my uncle from Oransay ~ how cool is that? 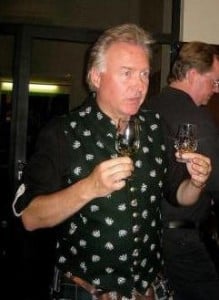 Thank you to Manfred Wizsy of Islay Whisky Chapterfor arranging for Whisky for Girls (& Guys!) to come to Austria. We had a wonderful time, met some wonderful people, heard some wonderful singing & music ~ and drank some wonderful whisky ~ we will return…… 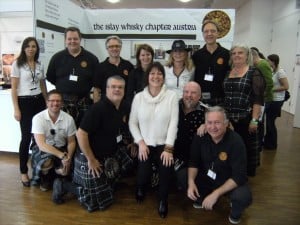 Whisky for Girls (& Guys!) and the Austrian Team 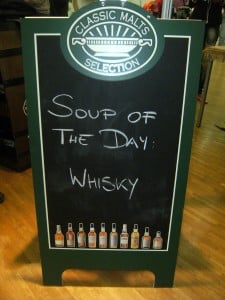 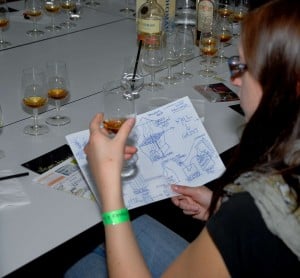 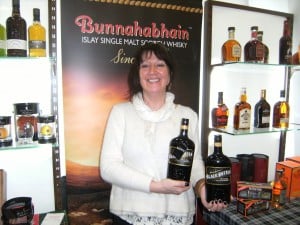 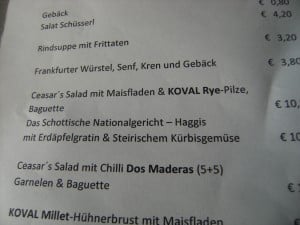 Haggis on the menu for the festival 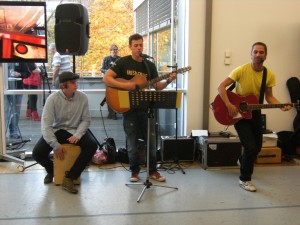 The Austrian band who sounded Celtic… 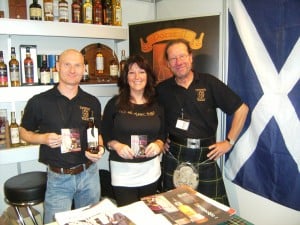 Myself and Mario from The Pot Still, and Alexander.