Falling in love with an island

Falling in love with an island

Guest writer and Islay Whisky Academy Kinship Host, Neill Murphy shares his love of Islay – and our whisky, in this evocative article. 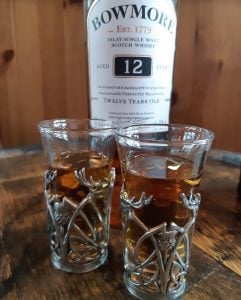 Something about Islay appealed to me, long before I ever went there. I suppose growing up in the shadow of Scotland’s largest city helped to foster an interest in small rural communities in out of the way places.

But it’s more than that. I’ve always been drawn to extremes. Extremes in music, in film and extremes in flavour. So when I started to enjoy whisky, I became fascinated with this tiny island off the west coast that was often described as producing the most unique spirit in the world.
My whisky epiphany came via a dram of Highland Park and that was followed with bottles of Jura and Glenlivet but the whisky of Islay is never far from any conversation on the subject, and I kept hearing how distinctive and bold its flavour profile was. Soon enough I had acquired a bottle of Laphroaig and my mind was well and truly blown. I had never tasted anything like it and I soon set to trying anything and everything I could get my hands on.

By 2014 I had arranged a trip with my wife and four of our friends. We had done our homework in terms of distilleries, where they were and when they were open, but the realities of the island still came as something of a culture shock. None of us drove at the time and we had made the decision to fly in order to avoid a lengthy journey by bus and ferry. The internet advised that a local bus service passed the airport just after our flight arrived so we hurried from the small terminal building and made for the roadside where we waited in bone-chilling wind for our transport to show up.
After what seemed an age, a royal mail van came trundling down the road and pulled up beside us. The woman driving asked where we were going, then told us to hop in. “No!” I said, “Thank you very much, but we’ll wait for the bus” and in one of those moments when you know what someone is going to say before they say it, she replied, “this is the bus”. Deciding that I hadn’t made enough of a fool of myself already I asked if there was somewhere to put our bags. The blank stare that met my question was answer enough so I sheepishly climbed aboard and tried not to look too much like a clueless tourist, a ship that had unfortunately sailed some 60 seconds prior.

Fortunately however there was no time to dwell on it, because we were soon arriving in Bowmore and after dropping the bags at our accommodation, a lovely house near the famous round church, we made straight for Bowmore distillery, just in time to join their 11am tour.
Bowmore was our first stop out of convenience but as the oldest distillery on the island it was a logical first port of call. It is also one of the few left in Scotland with an active malt-floor, making it an essential stop on any whisky trip. Our tour concluded with a few samples, all of which were excellent, and a bottle of their 15 year old was purchased so that the group could share a dram back at the house.
Looking back now we were remarkably disorganised that weekend. We had only three days on the island, one of which was a Sunday when very little was open, yet we had nothing concrete planned for the Friday afternoon. We fancied making the trip over to Jura but soon found out that it would be near impossible without some kind of transport. We already had trips to the south of the island arranged for the following day so we resolved to plan our next move over lunch at the Harbour Inn.
We decided to give Bruichladdich a call, just to check they had availability that day but we were met with the unfortunate news that the distillery was currently out of commission due to maintenance work. They did however, extend an invite to come and have a look around their warehouse after which they would pour us a dram or two at the shop, completely free of charge. It seemed an offer too good to refuse so we arranged a taxi and were soon heading to the Rhinns peninsula on the western edge of the island.
Bruichladdich was a whisky I had come across before but whilst I recognised its quality, it seemed, to my novice brain, somehow not befitting of the island because they favoured an unpeated style but the warmth of the welcome we received that day, coupled with the magnificent whisky on offer, changed my opinion radically. It turned out that the Islay definition of a “couple of drams” differed from that of the mainland and we sampled an array of exceptional whiskies, including my first ever taste of Octomore, poured by the late Duncan McGillivray. When it came time to depart, we enquired which way to Port Charlotte but Duncan wouldn’t hear of us walking in the rain, so we found ourselves riding in the Bruichladdich minibus to the Port Charlotte Hotel where we spent the next few hours discussing the events of the day with anyone that would engage with us.

Since that turned out to be just about everyone in the bar, our taxi back to Bowmore had to be re-scheduled to a later time on more than one occasion.
Bowmore is the largest settlement on the island and its central location and small selection of dining options make it the perfect place to stay when visiting Islay. That night we enjoyed dinner in the Indian Restaurant which to our dismay turned out to be BYOB, something we later conceded to be a blessing after the days consumption. The rest of the evening was spent in the Lochside Hotel, drinking and singing the night away in the best of company.
Saturday morning brought a round of sore heads for all but there was no time to feel sorry for ourselves because another taxi was already on its way, bound for the Kildalton coast. Our first stop was Laphroaig, home of the very first Islay whisky I ever tasted. There we would enjoy a selection of drams paired with blue cheese, orange slices and chocolate covered coffee beans, accompanied by great conversation with our host.
After a visit to the shop we left, with one of our party clutching a doggy bag of the aforementioned coffee beans. We made our way back to the main road on foot and headed east towards Lagavulin. A quick lining of our bellies with sandwiches hurriedly bought from the co-op that morning and we were ready for tasting number 2, a line-up that featured their new-make spirit followed by their 16 year old, Distiller’s Edition, Distillery Exclusive and 12 year old cask strength single malts. At one point the bag of chocolate covered coffee beans re-appeared, to be shared among the whole group and we were soon having a whale of a time once more.
By sheer luck it turned out that a bus was due just as were ready to depart and we managed to catch it back to Port Ellen where an excellent meal was to be had at the Islay Hotel. Yet another taxi and we were back home, freshening up with a dram and preparing ourselves to head out once more to sample the delights of a Saturday night in Bowmore.
Mercifully Sunday morning brought a change of pace, though admittedly that was because it took some of us, myself included, the whole morning to get out of bed. An afternoon stroll along the sand blew away the cobwebs and we made for dinner at the Bowmore Hotel only to discover that the place was in full swing. Apparently there had been a football match that day between Bowmore and Port Ellen. We didn’t ask who won. There didn’t seem any need if the celebrations were anything to go by. I remember telling one Gentleman that we had visited Port Ellen the day before, to which he replied “the only good thing about Port Ellen is the road to Bowmore!”
And so our visit to the whisky island drew to a close. The next day we were back at the airport and onwards to the mainland. It was a beautiful day and my window seat on the plane gave stunning views of the west coast of Scotland, visible in such detail it was as though I were looking at a map. I tried really hard to enjoy it whilst simultaneously attempting to stop my head from exploding after all the booze I had partaken of over the last few days.

Sometimes you leave a place and your mind turns immediately to your next destination, your next adventure, but others stay with you and Islay is one of them. It takes up residence within you and creates a yearning that can only be quietened by setting foot on the island again. It took my wife and I two years to make it back, but make it back we did, this time with four month old baby Isla in tow and it’s become a regular destination in the years since.
The island never fails to astonish me with its beauty. The light is astounding, the coastline magnificent, the weather… ahem… interesting, the people among the warmest you will encounter and the whisky, oh the whisky… Great whisky can be made anywhere in the world but nowhere else is there a convergence of magnificent spirit in such a small geographical area. Islay is about as close to heaven as I’m ever likely to get and every day spent away from the island is a day spent planning my return. 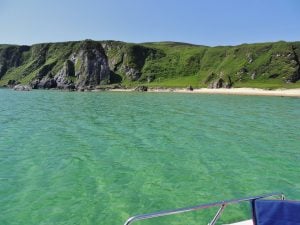