Don’t be broken hearted about Bruichladdich.

What an amazing job Bruichladdich have done in winning hearts and minds. Their customers feel an intense loyalty and have a huge feeling of ownership. They are like football club fans.
Football clubs change all the time. New players, new managers, new strategies and yet the fans stay with them, stay loyal. The fans are staying loyal to something inside themselves, it is from within themselves the passion is generated. The club is merely the medium which allows this intrinsic feeling expression.
Bruichladdich Distillery has managed to generate the same love and passion. Indeed, they are like a football team with their very, very tight corporate branding image ~ their team T shirts, and with McEwan as the charismatic club manager. 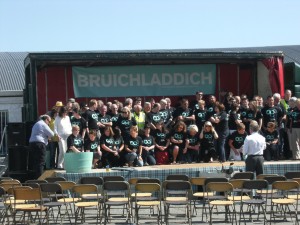 Distilleries are set up to make money. People may have a passion for their chosen way of making money, but if they werent going to make money they wouldnt do it.
Schroder and MacTaggart both invested in Bruichladdich, these are estate owners in Islay. Schroder is Schroders private bank ~ have you ever heard of a banker with passion or sentiment? If Bruichladdich Distillery wasnt seen as a good money making investment Schroder would never have invested. There is no sentiment or love of Islay in a bankers investment portfolio!
Jim McEwan is retiring next year ~ retiring from Bruichladdich that is. McEwan has plans of his own ~ he is on the next stage of his life journey with whisky. He is planning to travel the world with a Spirit Aid show. He will be like a rock star, he will be like The Boss but singing the praises of Scotch Whisky.
Mark Reyniers family are growing up, his children are moving off the island to be educated, his personal life is changing.
These men involved with Bruichladdich are business men. They saw a great opportunity, they showed the world what they could do. They were unusual and quirky ~ yes, because they had to be, they worked with what they could afford. They were innovative ~ yes. How do we generate an income while we wait for our whisky to mature? Lets make lots of different expressions, lets do this and do that, so we have a product to sell. (Ill not tell the joke here in this serious article, about Iain Allans dog, and the gate of the distillery, then the creation of a new expression!)
They had to do something to generate an income for themselves. And in doing so they opened up the world of whisky. Never a truer example of necessity is the mother of invention than Bruichladdich. No one can wait 10 years for a return on their new project ~ unless one is a nuclear power station perhaps.
Bruichladdichs best thing (apart from their drams ~ and McEwan, of course) is their brand image. How clever to make something as tightly branded as say, Coca Cola or Nike, appear so rural and authentic. Im not saying it is not authentic, but to create such a defined ACCESSIBLE Homespun corporate image is very, very clever. Bruichladdich made people fall in love with them. They used the rules of corporate branding to create an image of exactly the opposite. Its like Ardfin Gardens in Jura ~ Peter Cool worked very hard to achieve the feeling of a wild, untamed garden. This is far harder to achieve than merely making a tidy, conventional garden.
As Martha Beck says, the future is small, individual, unusual, different things. We all have access to everything now. People are jaded. They want unique, special, crafted things. The business thinkers of the world know this. This is forward thinking, seeing future trends.
We can push into new markets such as Brazil and Africa and sell large amounts of gut rot to poor people, which, shamefully, numerous large spirit producers will. But the future of Scottish Malt Whisky is in small unique brands, and Remy Cointreau have seen this in Bruichladdich. Remy Cointreau do not have a champagne house on their portfolio and I think Bruichladdich can fulfill that unique, quality role for them. Bruichladdich, or indeed Bruichladdich and a new Port Charlotte combined cannot make much difference to Remy Cointreaus bottom line. There is not the physical space or transport infrastructure to generate huge amounts of spirit. And if that is what Remy want to do they would have bought a large Coffey stilled plant on the mainland. Islay Whisky is a distinct brand in itself, one has to pay just for access to that now.
Remy are looking to the future. Its not the customer who has to worry about change of ownership, its the workers at the distillery ~ lets hope Remy will at least pay lip service to the family orientated way this working environment has been run for the last 10 years or so.
Bruichladdich has been an adventure for Mark Reynier, Jim McEwan et al, albeit a heartfelt one, but at the end of the day these guys dont stand still. They had a business idea, they took it to THEIR chosen level of fruition, and like a football club, or a river, or the concept of royalty, Bruichladdich will flow on, ever changing, ever the same.
If they were romantic, sentimental idealists they would have never managed to turn 6 million into 48 million in 10 years ~ The people at Bruichladdich Distillery truly are alchemists!
Bruichladdich Is Dead. Long Live Bruichladdich 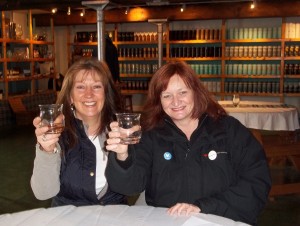